Join us on June 12th for DreamPusher Unplugged – an intimate, interactive performance and experience. Through good music, art, and conversation, we are creating a space for reflection, expression and connection through the arts.

Born and raised in Detroit, Michigan, JordanL picked up the pen at 15 and never looked back. Motivated by family, love, and the betterment of the black culture. JordanL is a force to be reckoned with when it comes to crafting verses. His music is meant to be a motivational tool for the listener to want to motivate others and so on and so forth; kinda like a chain reaction. In turn having his music change the world for the better.

Sharing stages all over the world with artists of all calibers has been an amazing ride and a true blessing for Cooki Turner. But the real joy is just being apart of the music. From 3 yrs old, Cooki has been singing in front of crowds large and small, from small stage plays to stadiums, and she is so grateful to be able to live her dream. Since releasing her debut project in 2013 she has received stellar review in the US & UK, even winning UK Soul awards for her single, Try when debuted. After releasing her 2nd project in 2016, Moment to Moment Vol 2., she began exploring new fields and founded Dope Artistry. A branding company that helped other creatives skip industry hurdles & hold on to the vision they initially had. From her humble church beginnings of Oklahoma City to Lagos, Nigeria, her music has reached far beyond her wildest dreams. Since relocating to LA in 2017 she expanded her experience while touring with Sunday Service, grew into a new field of Tour and Production Management and release a new EP, Intentions released just last year.

Queens-bred, LA based, internationally known. Hip hop/soul artist, Dynasty, has the soul of a dreamer and the fearless determination to follow that dream wherever it might lead. DY has been blazing tracks and stages for years with a catalogue that includes tracks with DJ Premier, Talib Kweli, Apollo Brown and more.

She has rocked alongside some of the greatest on so many stages from Germany to France, Italy to Romania and beyond, performing and connecting with people of all ages and backgrounds. Although the performing arts (music and acting) are her passion, inspiring others to push for their authentic best lives is her purpose. To combine the two, she created bloom.in.INK which promotes intentional growth, self nurturing and a deeper level of self awareness. It was birthed out of a desire to build a space to share openly in a creative way, be heard without judgement, connect and grow together.

Presented by Bloom In INK [@bloom.inINK] & Tap in LA [@_TapInLA] 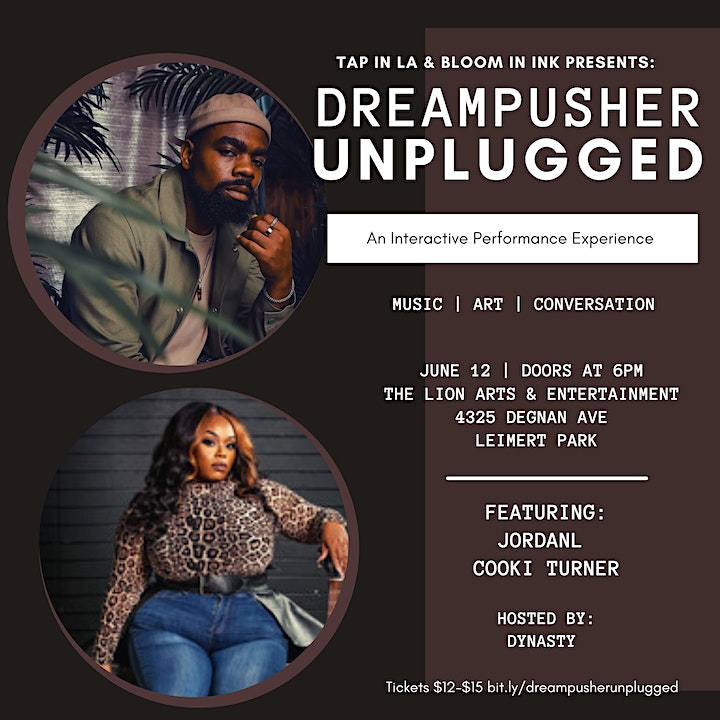